The international diamond cartel is controlled by a handful of firms which is also referred as De Beers Cartel. This cartel is one of the longest existing cartels and has existed for over more than a century. 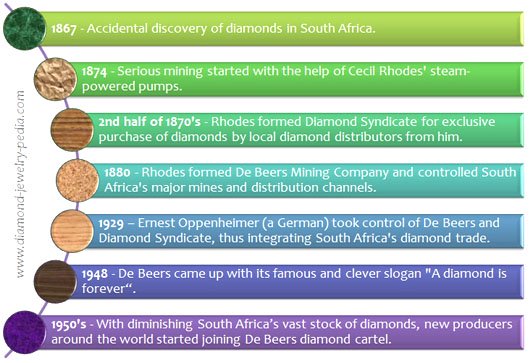 Eight countries — Botswana, Russia, Canada, South Africa, Angola, Democratic Republic of Congo, Namibia and Australia—produce the bulk of the world’s gem diamonds, and most of the producing entities within these countries adhere to an explicit set of rules of diamond cartel.

These entities manage their production according to demand, stockpile excess stones and sell the bulk of their rough diamonds to the Diamond Trading Company (De Beers owned entity based in London).

This conformity is the result of over a century of careful planning and negotiation, through which De Beers has successfully controlled the diamond trade.

In 1867, the accidental discovery of diamonds in South Africa laid the foundation of the modern diamond industry. Within months of the first discovery, prospectors from around the world rushed to pan the waters of the Vaal River.

However, the bulk of the diamonds did not lie on bed of the river, but instead inside deep volcanic pipes. This forced the miners to pool their resources and cooperate with each other.

In 1874, an Englishman named Cecil Rhodes arrived at Kimberley Mine and began renting very effective steam-powered pump to the miners which was used to pump out water from the mines. He soon installed pumps at other mines in the area and shortly thereafter began purchasing claims in the mines themselves.

Kimberley Mine photographed in 1871 (left) and Cecil Rhodes (right)

As Rhodes acquired these mines, he started facing following challenges of the diamond trade:

Solution to these problems was to form a well-integrated organization to manage the flow of diamonds from South Africa. Idea behind this was to keep supplies low and prices high. And if excess supply ever hovered on the market, De Beers itself would acquire and stockpile these stones.

So, Rhodes signed a formal agreement with his buyers (local diamond distributors) to form a Diamond Syndicate. Under its terms, the distributors would buy diamonds exclusively from Rhodes and sell them in agreed-upon numbers, at agreed-upon prices.

In 1880, Rhodes formed the De Beers Mining Company and by 1890, Rhodes controlled all of South Africa’s major mines, along with the distribution channels for their output.

These mechanisms remained in place until Rhodes’ death in 1902. Then, Ernest Oppenheimer, a German who had risen to prominence in South Africa’s diamond industry, began to worry that the Diamond Syndicate was still too independent. Syndicate had the potential to challenge the producers by shifting either supply or price. 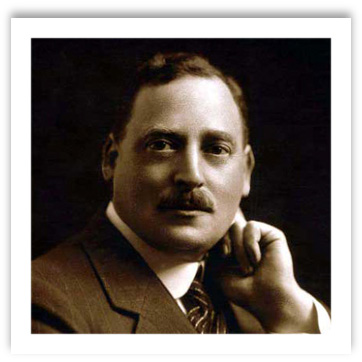 So, as Oppenheimer advanced through the ranks of the diamond trade, he started tightening the noose on channels of production and distribution. In 1925, Oppenheimer gained control of the Diamond Syndicate. In 1929, he also took control of De Beers, thus achieving near total integration of South Africa’s diamond trade.

He now controlled a system that brought diamond from mine to the end-customer. At the core of this diamond cartel was the Central Selling Organization (CSO) which was later re-structured to Diamond Trading Company (DTC), a London-based group. It acted as the chief intermediary between the stones mined in any given year and the consumers who would eventually purchase or polish or wear them.

Ten times a year, an elite group of dealers ("sightholders") would gather at CSO headquarters. There, the dealers would each be presented with an individual parcel of stones, chosen by the CSO to reflect both what the dealer was hoping to sell in the subsequent weeks and what De Beers wanted to place into the market.

Through this mechanism, De Beers was able to determine not only the precise size and quality of diamonds available each year, but also their price. Dealers were encouraged not to purchase diamonds from any sources outside the CSO, nor even to repurchase a "used" stone.

By 1950s, South Africa’s vast stock of diamonds began to diminish. Also, new discoveries of diamond deposits were made in other countries across Africa, Australia and Soviet Union.

For De Beers, these new players raised the challenged that had long haunted Rhodes and Oppenheimer: the threat of diamonds flooding the market and destroying the hard-won "illusion of scarcity" and thus depressing prices.

So, De Beers moved swiftly to bring the new producers into the fold of its diamond cartel. The South African company signed long-term contracts with the diamond-producing countries, guaranteeing to purchase a fixed proportion of the country’s output at a fixed price. This ensured De Beers to maintain strong control on diamond production.

In 1948, De Beers came up with its famous and clever slogan "A diamond is forever", later hailed by Advertising Age as the slogan of the century.

This slogan told diamond customers that their purchases were heirlooms, too valuable ever to be sold. This effectively killed the resale market while maintaining the demand of new diamond always high.

Through fine print and other media campaigns, De Beers conveyed to its customers (mostly male) that several months’ salary was the recommended price, with attention duly paid to the diamond cartel’s own criteria of color, cut, clarity and carat.

In order to flush out Conflict Diamonds from supply chain, the Kimberley Process Certification System (KPCS) was formed in 2003 by joint effort of various countries, NGO’s and diamond industry.

Per rules laid by KPCS, every individual who handles a diamond (from the miner to the jeweler) is responsible for maintaining an identity tag affixed to the stone at the time of extraction. With such a system, theoretically at least, no warlord in Liberia or Sierra Leone can slip diamonds into the pipeline.

KPCS proved exceedingly good for De Beers. It strengthened the De Beers’ principle of curbing excess supply of diamond and preventing new suppliers from entering the business. Like the diamond cartel itself, this new international system restricts supply and enhances the power of big, established players.

Kimberley Process keeps the warlords, small diggers and the shady traders out of the acceptable stream of commerce. It also imposes costs (for tagging, monitoring and auditing) that make it even more difficult for new or smaller players to enter the global market.

In the diamond market, (unlike oil market) sharp changes in price could mean a long-term shift in how consumers view diamonds, and how consumers think about the price that they pay.

It can be safely said that since Rhodes’s time, the diamond cartel has managed to impress upon consumers that diamonds are both valuable and scarce and that these should be purchased based on quality rather than price.

Much of this cartel’s success can be attributed to its leading player, De Beers - which has enforced the rules - and its ability to bring new producers into the fold and convince them not to sell outside its confines.

Note: In 2011, Oppenheimer family sold their 40% stake in De Beers to Anglo-American which earlier had 45% shares. So, with 85% stakes owned by Anglo-American, in 2012 De Beers became the member of Anglo American plc group.