Birthstone Jewelry is quite popular and has been adorned since ancient times. From the times since gemstones were discovered, their beauty and grace has amazed the whole human race. 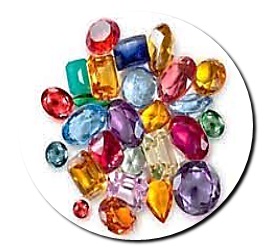 In ancient India, gems were associated with planets and astrological signs. Around 1300 B.C., there were quite a few gemstones that had religious significance. From these early origins, idea of birthstone was derived.

Besides the religious importance, some theories suggest that gems were thought to have curative capabilities as well. It was believed that different gemstones possessed healing qualities and were worn for protection, good luck and to ward-off illness.

Some theories suggest people chose gemstone based on its color and the magical or healing powers associated with that color.

For instance, emerald (green in color) symbolized faith and fertility. Due to this, people wore emeralds to help lessen the pain of childbirth.

By the advent of 18th century, gemstones were associated with specific months. Europeans, beginning in Poland, wore each month's stone during that month. This meant that everyone had to own twelve gemstones. So, later people began wearing only the gem representing the month of their birth. This tradition continues till today.

The stones associated with each month have varied for several reasons. Gemstones were first named and grouped according to their colors. For example, all red stones (including garnet and ruby) were called carbuncles. And red was the color for January, so people born in January wore their choice of carbuncle as birthstones.

People from different countries chose birthstones that differed from those selected in other countries. As the idea of wearing birthstones became more popular, people began selecting less-expensive alternative gemstones, leading to more diversity.

All these different theories have puzzled people throughout the history, and led to numerous conclusions that were themselves mysterious. There has always been a debate whether these birthstones should be classified according to astrological signs or by months.

These days, use of birthstones is more ornamental in nature. Nowadays, one can easily find people wearing birthstone jewelry as a symbol of their birthday as well as their personality.

Fine gemstone jewelry is a very significant gift that is always cherished not just for its beauty but also for the things it signifies. The fact cannot be denied that a gemstone engagement ring qualifies as wonderful diamond alternative engagement rings.

In 1912, the National Association of Jewelers adopted the standardized list that they called the List of Modern Birthstones and is widely used till today. Only one addition was made to this list since then – Tanzanite was added to December’s birthstone.

You can select birthstones according to your zodiac sign, the day of the week or season of the year in which you were born, or by religious affiliation. Whether you choose to wear a birthstone for its healing qualities or just because you love its beauty, it's always nice to wear jewelry representing one's birth.