Emerald - The May Stone

Emerald (pronounced as EM-ER-ULD) - the birthstone of May and the symbol of rebirth - is believed to grant the owner foresight, good fortune, and youth. Its name is derived from the French "esmeraude" and the Greek root "smaragdos" which means 'green gemstone'. 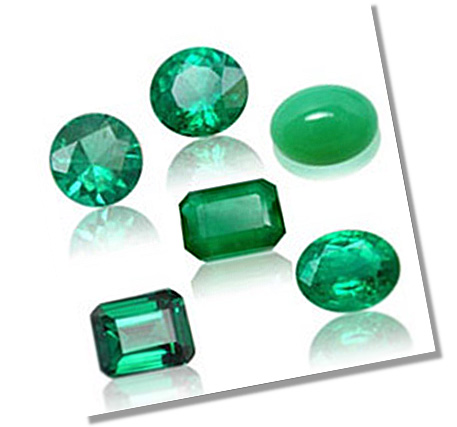 It was mined in Egypt as early as 330 B.C. The ancient Romans associated this gemstone with fertility and rebirth, and dedicated it to Venus, the goddess of love and beauty.

This gemstone was fancied by Queen Cleopatra to such an extent that the Egyptian mines where these stones were mined in about 3000 B.C. were later named "Cleopatra Mines".

On Mohs Scale of hardness, this stone is rated 7.5-8. Although this gemstone is relatively hard and durable, it must be protected from blows because the inclusions found within it make it susceptible to breaking.

This gem is the green variety of mineral Beryl and one of the most highly prized of all gems (blue beryl is known as aquamarine).

Historically, this gem was believed to bestow its wearer with faithfulness and unchanging love - may be that's why wives of Ottoman sultans were given this stone. It was also thought to clam mind of wearer and bestow with wisdom and ability to predict future events.

In general it can be said that this stone was believed to protect against illnesses, heart diseases, physical danger and evil. It was also thought to heal broken hearts.

The most desired color is an intense grass green which is considered very valuable, even when visible inclusions are present in the faceted gem. Flawless jewels are rare, so the flaws have come to serve almost as "fingerprints", while flawless varieties are an immediate suspect.

This stone is very sensitive to pressure and banging, and the well-known "emerald cut" was developed specifically for this gem to reduce the amount of pressure during cutting.

A rare and unusual form of this gem, known as "Trapiche Emerald", is characterized by star-shaped rays that emanate from the center of a stone in a hexagonal pattern. These rays appear much like asterism, but, unlike asterism, are not caused by light reflection from tiny parallel inclusions, but by black carbon impurities that form in a star-shaped pattern.

Its name "Trapiche" (tra-pee-chee) has come from a type of wheel that is used to grind sugarcane in Colombia. These Trapiche gems are only found in Colombia and are cut into cabochons. 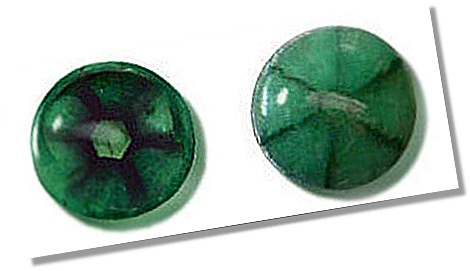 The green crystals grow slowly within metamorphic rocks and are restricted in size by the rock, making large gems rare and costly. Highly prized since ancient times, a fine emerald can be more expensive than a high quality diamond of the same carat weight.

The healing properties of this birthstone are known to be effective for health problems relating to: the eyes, fertility, spine and headaches.

The stone is also used to enhance mental capabilities and believed to improve mind and character of the wearer.

Transparent varieties of this gem are cut faceted for jewelry, and make one of the most popular jewelry gemstones. This jewel is very popular in earrings, pendants, and rings. You may like to read about diamond and emerald engagement rings. While, translucent ones are cut and polished into cabochons, beads and also used extensively in jewelry. 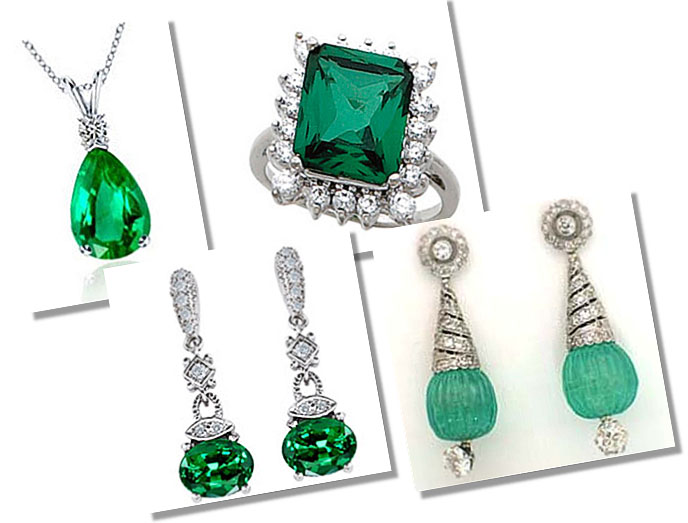 Some people believe that wearing this gem brings wisdom, growth, and patience. And as any couple in a long-term relationship would agree, all of these qualities are essential for a successful and lasting love. This may explain why a gift of this jewel for an anniversary, or anytime is considered symbolic of love and fidelity.

Techniques to enhance color and reduce the visibility of flaws are frequently used on this birthstone. A common practice one that goes back to early Greek times, is to fill cracks with oil. Oiling is the practice that is accepted by the jewelry industry since it is actually good for the stone because of its fragile nature. Oiling hides some of the whitish flaws, which are actually cracks.

Though this stone is quite hard, it is brittle and can chip easily. So, utmost care should be taken while wearing, handling or cleaning it. It may develop internal cracks if banged hard or if subject to extreme temperature change.

Stones that are treated to mask internal flaws should never be cleaned with an ultrasonic jewelry cleaner nor subjected to steam cleaning. This cleaning method may remove the oil from cracks and expose the hidden internal flaws.

A good friend of mine took her heirloom emerald ring to her jeweler for a "really good cleaning", but she never left the store and was standing right there when the ring was put into the cleaner. She couldn’t believe her eyes. Post cleaning, there was a sudden loss of color and the "appearance of more flaws".

The ultrasonic cleaner had removed the oil that had earlier filled the cracks, and the gem became several shades lighter and more visible flaws emerged. However, fortunately for her,this gem can be re-oiled, and the jeweler was able to re-oil hers, and its former appearance was restored.

Epoxy resin filler treatment is now used on emeralds mined in many parts of the world, including Colombia and Brazil. The use of oil and epoxy resins are considered acceptable practices, but be sure the price reflects the actual quality of the stone.

As with all highly desired gems; greater the value and demand, higher are the chances of fraudulent practices. Because of the popularity and value of this gem, imitations and synthetics are abundant.

Examples of almost every type of technique to simulate emerald can be found – color alteration, synthetics, substitutes (of less valuable green stones), doublets and triplets (a stone composed of two or three pieces of stones glued together) are also common.

Therefore, be especially cautious of bargains, deal with reputable jewelers when planning to purchase an this gem, and always have the purchase verified by a qualified gemologist – appraiser.