Aquamarine was first discovered in India more than two thousand years ago. The Indians used this stone to spark mental clarity and develop public speaking capabilities. Its name is derived by combining the Latin words "aqua" and "marine" meaning water and sea respectively. It’s pronounced as AH-KWA-MAH-REEN 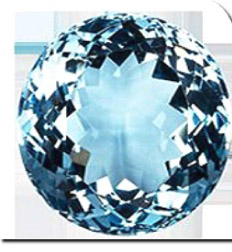 This gem is the member of the Beryl family, which includes emerald, but it is less brittle and more durable than emerald. Unlike emerald, it is available with excellent clarity even in very large sizes. Beryl was used as far back as 2,000 years ago to correct vision, and it continues to be used today in the manufacturing of eyeglasses.

This jewel was believed to protect sailors, as well as to guarantee a safe voyage. Its serene color is said to cool the temper, allowing the wearer to remain calm and level-headed.

It is believed to give mental peace and clarity, providing emotional and mental balance. It has been used as an aid in meditation and to assist in self-expression.

This stone is a universal symbol of youth, hope and health, blesses those born in March. Wearing this gem earrings brings love and affection (perhaps a nice anniversary gift). 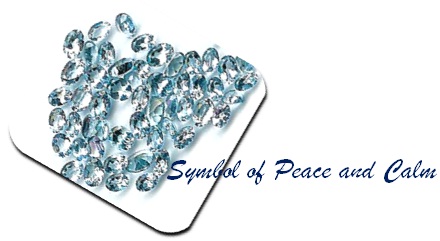 This jewel is available in color from light blue to bluish green to deep blue (the most valuable and desirable color). Most of these jewels available in market are heat treated.

Naturally occurring stones are usually lighter and greener in color, and heat treatment creates deeper bluer hues. While natural deeper bluish hues do exist, they are quite rare. The gemstone industry considers it an acceptable practice to heat treat this stone, although this information should always be disclosed to the buyer. Unlike other gemstones, the majority of these stones are flawless.

This gem can be faceted into many cuts. Translucent varieties displaying cat's eye effect and aster-ism are uncommon, but they do exist and are cut and polished into cabochons (non-faceted stones). Low quality stones lacking transparency are sometimes used as beads and as rough polished stones in bracelets and necklaces. 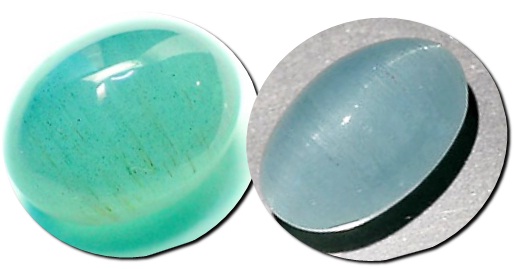 It is a relatively abundant gem, the largest deposits being in Brazil, but other sources of this gem are in China, India, Australia, Africa, Nigeria, Madagascar, Zambia, Pakistan, Mozambique and the United States.

Though infrequently, its large crystals have been found in Brazil: 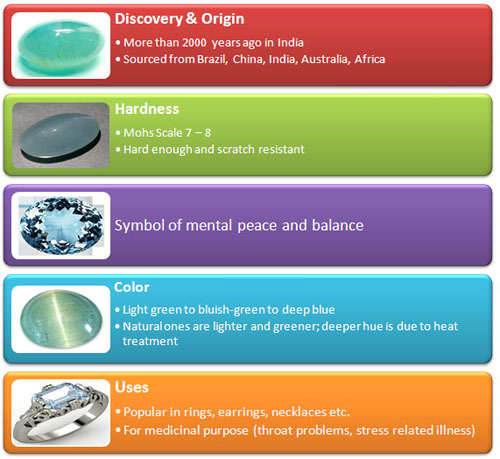 Long been considered as beautiful and moderately priced gem, it is now entering the "expensive" classification for stones in larger sizes with a good deep blue color.

However, one must be careful to not to confuse it with blue topaz. While topaz is a beautiful gem, it is usually much less expensive, since it is usually treated to obtain its desired color.

For those who can’t afford this jewel, for them blue topaz is an excellent alternative – as long as it is properly represented and priced. Also, note that many similar-colored synthetic spinels are deliberately sold as aquamarine.

The cost of producing synthetic variety is very high when compared to the relative abundance of this gem, so its synthetic counterparts are generally not produced for the gemstone market.

On Mohs Scale of hardness, this stone is rated 7-8. This mean it is hard enough and scratch resistant and can be appropriately used in jewelry. With its scintillating color and relative abundance, this jewel has become a one of the favorite choice for modern jewelry.

It is popularly used in rings, earrings, necklaces, and other jewelry items. This gemstone’s subtle colors are particularly well suited in prominent displays, especially Aquamarine drop earrings and Aquamarine pendants.

Any contemporary jewelry designer can tell you that the stone jewelry is in constant demand. Its pale color beautifully complements spring and summer wardrobes.

A gift of this gemstone is the symbol of both safety and security, especially in long standing relationships. Some people even say that this gem reawakens love in a tired marriage, so if you want to bring back that spark in your partner's eyes, you might consider this gem as an anniversary gift! Read about Aquamarine Engagement Rings.

This stone is said to have medicinal value and is used for healing:

I would suggest you to avoid a shallow cut stone, since in long run color will become paler as dirt accumulates on the back.

The light blue to blue-green color of Aquamarine may fade upon prolonged exposure to light, so it is especially important to purchase this gem from a reliable dealer. Although, is a hard and durable gem, but it may develop internal cracks if banged hard.

Concentrate more on quality of the gem and not the size of the gem; this is what really matters the most.