Garnet is the birthstone for month of January. Its name is derived from the Latin word "Granatus" which means grain or seed, and is called so because of the gemstone's resemblance to a pomegranate seed. Though it appears like a seed, but with Mohs hardness - 6.5 to 7.5 - it is definitely very hard. 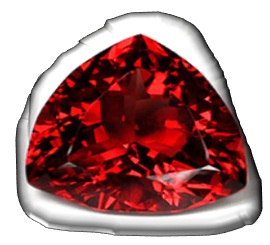 Its reference dates back to 3100 B.C., when the Egyptians used this gem as inlays jewelry. Red garnets were known to promote sincerity and relieve anger and discord.

It was believed that, if a well formed lion image is engrave on it, it will protect and preserve health, cure the wearer of all disease, bring honors and guard from all perils in traveling.

As antiquity this gem has always been famous for inner glow and vibrancy. The crown of the German emperor Otto (from 912 A.D. - 973 A.D.) was decorated with the most famous Garnet of all, known as the "Wise One".

The family of this gemstone is one of the most exciting families in the gem world, best known for their blood red color. First ever mined in Sri Lanka, this stone is also found in Africa, Australia, India, Russia, South America and United States.

Hard, durable, often very brilliant, this gem offers great versatility. This diversity is due to unique combinations of elements within each particular gem, such as iron, calcium, and manganese. There are no known enhancements for this gemstone. It occurs in every color of the spectrum, except blue. Depending on variety, quality and size lovely varieties of this gem are available from under $ 25 per carat to more than $11000 per carat.

Although, most commonly known for its red color, it comes in a variety of other hues, including muted yellows, vibrant oranges, rosy pinks, lime greens, and violets. It can be found in almost every color and shade.

Its some shades of red varieties is sometimes confused with Ruby. It is best known in a deep red variety, sometimes with a brownish cast, but it can also be found in fiery orange-red and brilliant wine red shades as well. A non-transparent variety, Grossularite, has a jade-like appearance and may be mistaken for jade when cut into cabochons or carved.

This gem has also been discovered in yellow that changes from red to blue depending upon the light.

This gemstone is often mistaken for other (usually more expensive) gems. Almandine and Pyrope are popularly the most common types of this gem, and perhaps the most affordable ones.

Rhodolite is also a popular type and this is usually mined in places like India, Africa, Malaysia and Sri Lanka.

Tsavorite (green in color) is one of the most beautiful. Many people confuse it with an emerald of the finest quality.

There is also a rarer green garnet called Demantoid which costs slightly more than Tsavorite. It is slightly softer than Tsavorite but has more fire. These gems offer exciting alternatives to the person desiring a lovely green gem. While still rare and expensive, these gems are far less expensive than an emerald of comparable quality.

It is considered to be one of the most versatile gems in the world market today. Following are its uses:


This gemstone is quite popularly used in engagement rings, earrings, pendants and all kinds of jewelry thanks to its vivid color and its versatility. Due to its relative abundance compared to other precious stones, these jewels are significantly more affordable and make great gifts.

This stone continues to be the protective gem of journeyers. Gifting it is thought to be the symbol of love and the desire for a loved one's safe travel and speedy homecoming.

No matter what kind or what color of garnet you may prefer, one thing is for sure – this gem is definitely versatile and beautiful. One doesn't need to use a microscope to be able to appreciate the beauty of this stone. The people who were born in January are very lucky to have this jewel as their birthstone.

In the end, I would suggest to consider following points when thinking of purchasing this gem:

Return from Garnet to Birthstone Jewelry