Peridot - the birthstone of august - was quite popular among ancient people. Its history can be traced back to more than 3,500 years in Egypt, where it featured in royal jewelry. 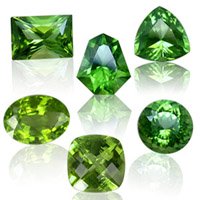 Name of this stone has come from the Arabic word "faridat" meaning gem. It’s pronounced as PAIR-EE-DOH. Although, it can be pronounced both with and without "t" at the end, but most professionals in the gem trade pronounce the "t".

The most unusual Peridot comes from meteorites called Pallasites. This is one of the few extra-terrestrial gemstones known to man!

The finest quality of this gem that comes from Egypt, has a minimum of yellow in it and is a bright clear green. But, unfortunately it is no longer mined and is not readily available in the market.

Fine Burmese variety is fairly rare in sizes over ten carats. It is of dark clear green color with only a hint of yellow.

Norwegian peridot is yellowish-green but it is much softer in color than the other sources. Today, most of this gemstone supply comes from Arizona with other sources being China, Norway, Myanmar, Brazil, Australia, Hawaii, Congo and Pakistan.

This stone is the gem variety of mineral Olivine (a complex silicate of magnesium and iron formed as rocks). The color intensity of this gem depends on the amount of iron present in the stone; the more iron it contains the deeper green it will be.

Although, not as brilliant as many other gemstones, the richness of its color can be exceptional. It comes in various shades, from yellowish-green to darker, purer green color. But people are more attracted to the bright lime-greens and olive-greens.

Older peridots have cloudy or milky inclusions while the more recent ones in the market have few flaws and can be of exceptional quality.

It was believed that this jewel glowed with light even as darkness fell. It is known as both "day stone" and "night stone", keeping its shining color even under artificial lighting. For this reason, it is sometimes also called "Evening Emerald".

It is widely available in small sizes but larger sizes are becoming scarce, so prices of large sized stones are now fairly high for good quality material.

This lovely, transparent, yellowish green to deep purer green color stone was quite a powerful gem. It is also popular today but probably more for its depth of green color than its professed powers.

Some people say, the force of nature is alive within this gemstone, making a gift of this gemstone symbolic of vitality. It signifies strength, both individual and within a relationship, as well as the promise of new growth in years ahead.

Because of its yellowish-green color, it was also believed to cure or prevent diseases of the liver and dropsy. It was grounded to powder and used as a remedy for asthma and as a cure for thirst brought on by fever. And if that is not enough, if worn on the left arm it was thought to protect the wearer from the evil eye.

Though pretty and popular, it is not a very durable gemstone. This stone is brittle and can easily abrade around facet junctions. So, it should be set into protective bezel setting.

Caution should be exercised while wearing this gemstone. This is because, it is not a very hard stone and may scratch easily, and has a tendency to occasionally burst under great stress. Also, it cannot stand intense heat or rapid temperature changes. It can get easily chipped if banged hard, and should never be steam cleaned or cleaned with ultrasonic.

Also, remember that some less expensive stones (green sapphire and certain colors of green tourmaline) resemble peridot, so make sure to verify that you have purchased original and not one of these less expensive gemstones.

Return from Peridot to Birthstone Jewelry