Blue Hope is the diamond which is surrounded by maximum number of legends. It is unfortunate to say, that it is also associated with bad luck for its owner. 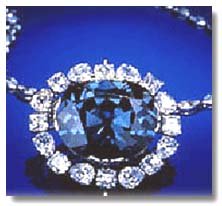 This stone was also discovered in state of Andhra Pradesh, India, the same place from where Koh-I-Noor was discovered. It was discovered in Kollur mine, a well known source of colored diamonds. Originally, this stone weighed approximately 112 Carat. It is the largest diamond of its type.

An examination in 1988 by Gemological Institute of America showed the diamond to weigh 45.52 carats (which was earlier thought to weigh 44.50 carats). It described it as "fancy dark grayish-blue".

When exposed to short wavelength ultra-violet light, this stone produces brilliant red phosphorescence ('glow-in-the-dark' effect) that persists for sometime even after light source is switched-off.

Its cut was described as "cushion antique brilliant with a faceted girdle and extra facets on the pavilion". Examination of this diamond described its dimensions as 25.6 mm X 21.78 mm X 12.00 mm. 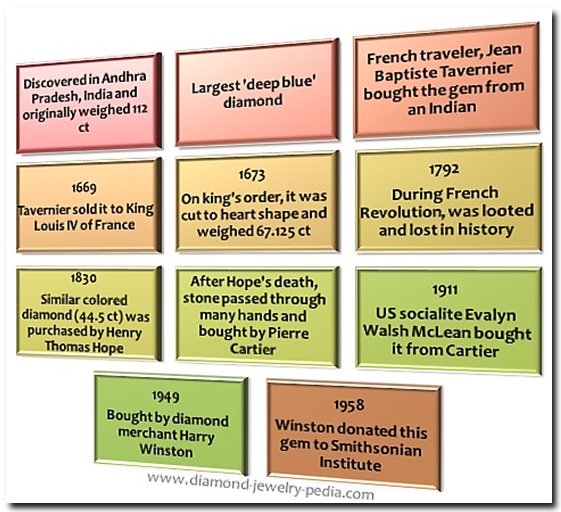 Now, let’s delve into its history…

Blue diamond first came into light through a French traveler, Jean Baptiste Tavernier. It is said that he acquired the diamond from an Indian during one of his five voyages to India between 1640 and 1667. He then brought the stone to Europe and sold it to King Louis XIV of France in 1669.

Its cut was of Indian style which emphasized size more than brilliance. In 1673, on king’s order this diamond was cut into heart shape and weighed 67.125 carats. English speaking historians have termed this resulting stone as French Blue. The king had the stone set on a cravat-pin.

In 1749, King Louis XV had the French Blue set in jeweled pendant for the "Order of Golden Fleece". But this stone fell into disuse after the death of King.

Unfortunately for French Royals, in 1792 during the early stages of the French Revolution, this stone along with other crown jewels was looted from royal storehouse. While many jewels were later recovered but French Blue was not among them and it lost in the history.

In 1830, similar colored diamond weighing 44.50 carats was purchased by English banker Henry Thomas Hope. It was after him that this stone was renamed Blue Hope.

After Hope’s death, this stone passed through many hands, like English jewel merchant Adolf Weil, US diamond dealer Simon Frankel and Pierre Cartier.

Cartier offered the diamond to US socialite Evalyn Walsh McLean. Initially, she rejected the stone in Hope family’s old settings. But in 1911, she bought the more appealing modified version which Cartier had reset it in a more modern style.

In 1949, after the death of McLean, this gem was sold to settle her debts. It was bought by New York diamond merchant Harry Winston.

Over the next decade, Winston exhibited McLean's necklace in his "Court of Jewels," a tour of jewels around the United States. At some point, he also had the Hope Diamond's bottom facet slightly cut to increase its brilliance.

In 1958, Winston donated the diamond to Smithsonian Institution, and it is now on display in Washington D.C. 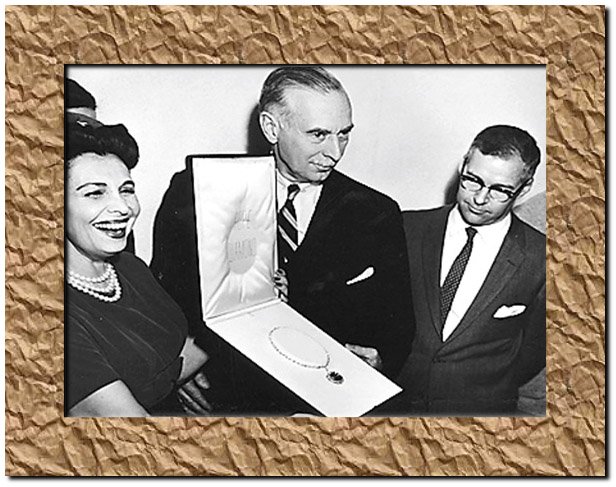 According to legends, Tavernier stole the diamond from a Hindu temple where it had been set as one of the eyes of an idol. Temple priest then laid a curse on whoever might possess the missing stone.

This stone was blamed for the unhappy fates of historical figures linked to its ownership. It is often believed that its owners faced series of misfortunes.

However, since this stone was put in care of Smithsonian Institution, there have been no unfortunate incidents related to it.