Flaws and inclusions in diamonds are judged and graded by different institutions world-wide and various grading systems are practiced, with all systems having different methodologies for clarity grading of diamond.

Observation of inclusions for valuation of diamond is not a recent thing, as clarity grading of diamonds has been in practice since long back. However, the system in place was not as comprehensive as modern methods.

In earlier days, clarity grading had two definitions: "pure" for clean diamonds and "pique" for spotted diamonds, while diamonds which showed no inclusions under slightly magnifying loupe were called "loupe clean".

The Gemological Institute of America (GIA) should be credited with introduction of diamond clarity grading scale in 1952 that comprises of clarity grades for the classification of clarity. They introduced various grades and mapped them to size, count and location of inclusions in diamonds to be graded in particular category.

Clarity grading is also taught in various institutions world over. Some of the institutes and laboratories are:

Different diamond grading laboratories and agencies have their own approach towards clarity grading. Each clarity grading system is subjective and depend on human judgment. It may happen that same diamond is graded differently if sent again for grading. Reason being it might have been graded by different grader.

However, GIA has the strictest grading standard of all, because rarely is the case when a clarity grade assigned by this lab (for a particular diamond) is reduced further when evaluated by any other diamond grading lab. In other words, grade given by a non-GIA lab is usually better than the grade given by GIA.

You can always get the clarity grade of your diamond evaluated from any professional grading organization or any individual independent jewelry appraiser who is certified by such professional organization.

Steps to be followed during Diamond Clarity Grading

As I have mentioned before, there are various universally-accepted clarity grading systems practiced world-wide, with each having clearly defined definitions and descriptions for a particular inclusion in every clarity grade. However, since there are unlimited types of inclusions it's not at all easy to set the exact definition.

No two diamonds are same with respect to inclusions. Every clarity grade consists of definite characteristics and specific features. So, if you have learned clarity grading then I'll suggest you to keep in mind below points to get the best and accurate result: 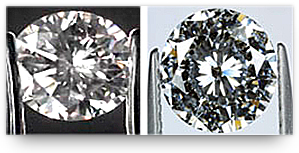 As a grader, questions you must ask

Classification of inclusions depends on various factors. To grade diamond into particular category it should be viewed through crown and the grader should ask to himself the following questions to judge correctly:

Clarity grading of diamond is not a one-time activity. Diamond might get scratched or blemished due to daily wear. If the diamond was graded 6 months back then it should be graded carefully if it’s being resold. There are chances that a VS2 clarity diamond may be graded to SI2 if it has developed some crack over the period of time.

So, don't assume that clarity grade of a diamond remains constant, and its grading is just a one time activity. Therefore, it's always advisable to check the evaluation date of diamond as well while going through its grading report. This is how you can ascertain the validity of quality reported.

Return from Clarity Grading System to Clarity of Diamond