How Diamond comes to Earth's surface?

How diamond comes to earth's surface? A journey no one would like to be part of!

Who doesn't get mesmerized by a sparkling piece of diamond! The enchanting brilliance of diamond can bring anyone on knees. But, do you know what the bling that we love so much goes through before reaching its final destination, i.e. in the hands of its lovers.

Diamonds are formed at the temperature as high as 1200 Celsius or 2200 Fahrenheit and extreme pressure of 5 Giga Pascal.

These fearsome conditions exist approximately 100 - 120 miles beneath the earth’s surface. Originating from carbon-based minerals, it takes billions of years for a piece of diamond to reach its current sparkling form. Learn more about how are diamonds formed.

Diamond reaches the earth’s surface through: 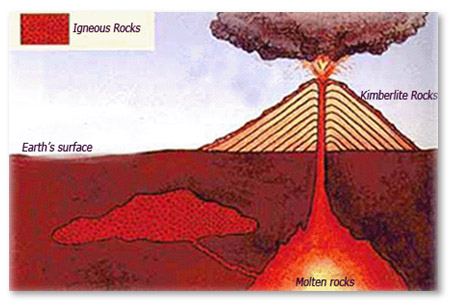 At the time of volcanic eruptions, when magma or molten rocks pass through diamond deposits beneath the earth's surface, diamonds also get caught up in this hot soup of molten rocks before starting its journey towards earth’s surface.

Magma rises upward towards the surface at rapid speeds (with speed as high as 180 mph and sometimes even more) through these pipes, resulting in a shallow supersonic eruption. This process is often compared to uncorking of a shaken bottle of champagne. Note that, if speed of magma is not high enough then diamond can change its crystalline structure to graphite if remained exposed to magma for too long.

Volcanic pipes with and without diamonds

When magma from these deep volcanic pipes cool down, it solidifies into Kimberlite rocks, and the volcanic pipe from which magma comes out is called Kimberlite Pipe. The rock and pipe got their name after the city of Kimberley in South Africa, where these rocks and pipes were first discovered in 1871 - this is what led to the diamond rush in that region and foundation of De Beers.

Kimberlite being formed from volcanic eruption is categorized under igneous rock category, and it is from the kimberlite pipes that the diamond is mined. However, note that all kimberlite rocks don't bear diamonds (as shown in the above image). These rocks are just an indicator that diamond may be found in that region - only 1 in every 200 kimberlite pipes contains gem quality diamonds.

This term is derived from Spanish word 'placer' meaning "alluvial sand". After coming on earth’s surface, diamond stones get scattered over vast areas like streams, hills, rivers, along beaches and sea shores (image below). I must add that diamonds from alluvial deposits are of highest quality because over the period of time, wear and tear due to water current destroys non-structurally correct rocks while only the most perfect stones are left behind. 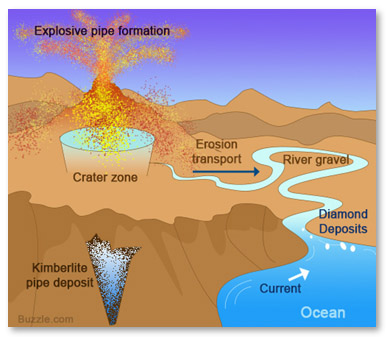 Though diamond is never formed below oceans, but due to erosion of top soil by air and water, it can be found in oceans as well. Due to its size and density, diamond gets deposited at the bottom zones of moving sand and gravel.

These alluvial diamond deposits are extracted and removed from sand, gravel and clay through alluvial mining process. Alluvial mining is categorized under following:

Once the crystal stone comes to earth’s surface, it can be transported hundreds of miles through glacier action. Due to glacial activities, diamonds are found in places that are not appropriate geologically.

Meteors can be considered as another source of diamond. This happens when meteors strikes the earth’s surface. This phenomenon results in only micro-sized diamonds. Due to their very small size, these diamonds are not considered as valuable as their bigger sized siblings.