World over jewelry is worn for number of reasons - adornment being the primary purpose. Jewelry is also sported as a form of symbolism and artistic display. 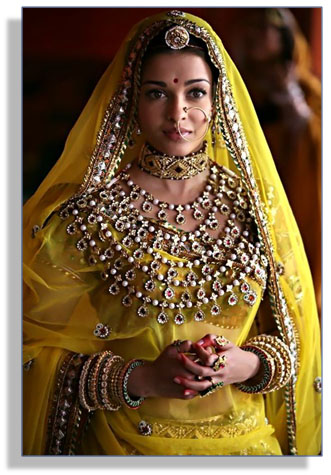 However, in Indian culture, purpose of jewelry is not just adornment and display; it is also worn for curative reasons.

Significance of Jewelry in Indian culture

Every piece of jewelry has its own virtue – be it its material, form, design or its use. An Indian married woman wears jewelry in every visible part of her body and particularly on joints and pressure points.

From crown to head (seat of knowledge and enlightenment), to ear lobes, neck, arms, forearms, around waists, hips and right down to ankles.

These pressure points closely synchronize with body’s energy centers (Chakras).  According to Indian scriptures, energy centers regulate the flow of Prana (or life breath) throughout the body. And when all these points are activated, the entire body gets proper blood circulation and all organs function in an efficient manner.

On this page you will get to know about some of the traditional Indian jewelry pieces, and their therapeutic effects on our body. So, let’s start from head.

Indian women grace their forehead by jewelry of different shapes and sizes. Weight of these pieces on forehead regulates blood circulation in head and prevents headache. It’s very easy to put on a maangtika (designed to be worn on the center parting) – just attach its string-end to hair. 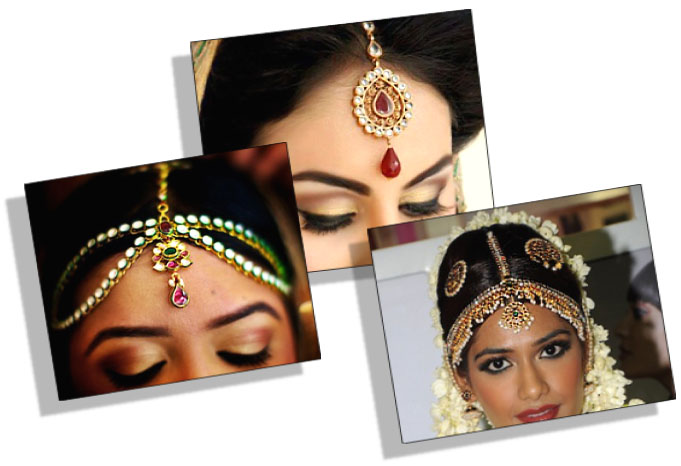 Jhoomar is the other variety, and it’s worn to one of the sides of forehead. 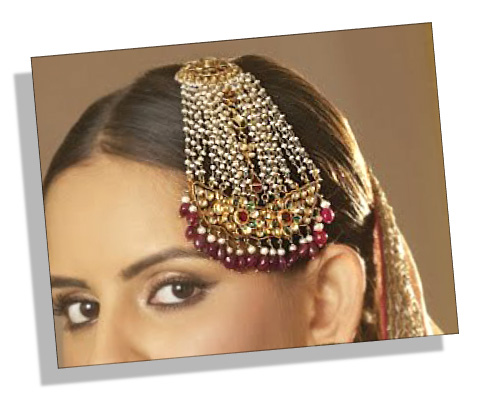 Handy Tip: Detachable maangtika can also be used as a pendent or brooch. Creativity has no limit, so you can even blend your traditional head ornament with a western outfit.

In accordance with Indian tradition, earrings are adorned by both men and women. Ear piercing is nothing but subjecting it to acupuncture. This point is directly linked to kidney, and thus activates and improves the function of kidneys.

Traditional jhumka and kundal look great with ethnic wear, and add a royal touch to overall dressing. Long jhumka can said to be the traditional answer to contemporary chandelier earrings! 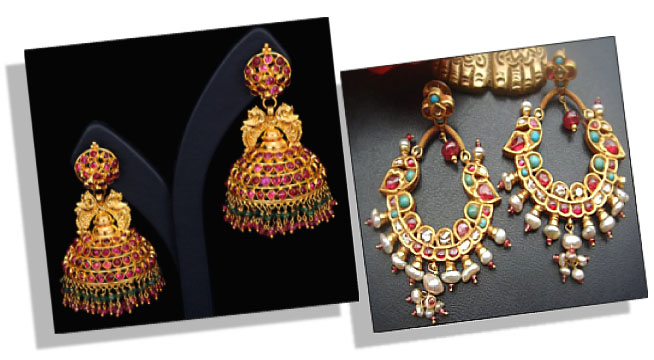 This is the piece of stead-like ornament. There are different beliefs about benefits of wearing a nose ring. Some say it regularizes the breath and some say it eliminates the toxins coming out while exhaling. 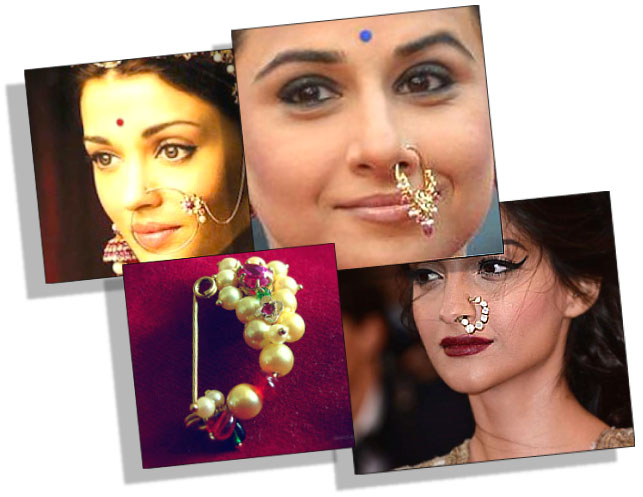 According to Indian medicine, a female who gets her nose pierced is assumed to experience less pain while delivering child. This is because it is believed that nose piercing leads to pressing of a vein which makes the child birth easier.

Amazingly, many women get both sides of their nose pierced, even center of the nose. So, who says only youngsters these days are going crazy with piercing! They are just continuing with what their previous generations did. 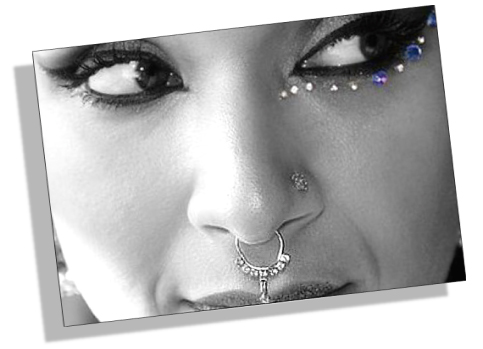 A necklace puts a mild pressure on certain acupressure points surrounding the neck which helps in reviving blood circulation.

Traditionally, neck ornaments come in various lengths - like Hasli is similar to collar necklace. Kantha, Mala and Haar can also be of different lengths just like lariat and opera necklace. You may also like to read about how to choose the right necklace. 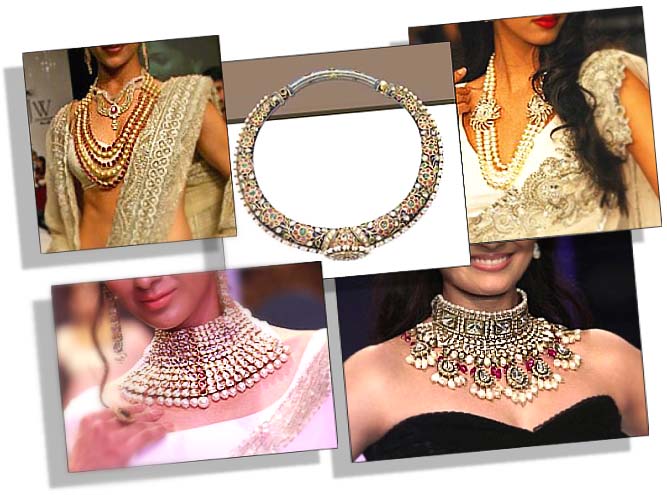 Every Indian bride wears a mangal-sutra – identified as symbol of marriage. It has same importance in the Indian culture as that of a wedding ring in western culture. It is usually made of black beads and gold, and is put by groom on bride’s neck during the wedding ceremony. 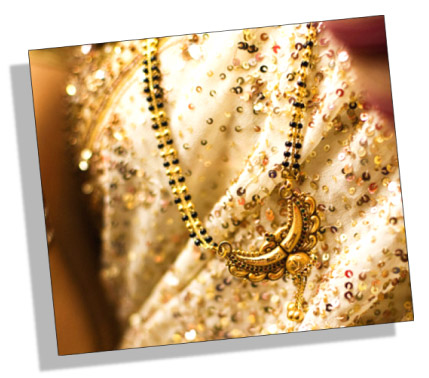 It’s believed that mangal-sutra should always be hidden or covered in the inner garment. This is very beneficial because of constant friction between gold and body. Hiding mangal-sutra is also supposed to ward-off evil eye from married couple, and ensures happy married life.

This piece of jewelry adorns the round forearms of an Indian bride and adds a vintage and royal touch. Armbands are believed to keep evil away. 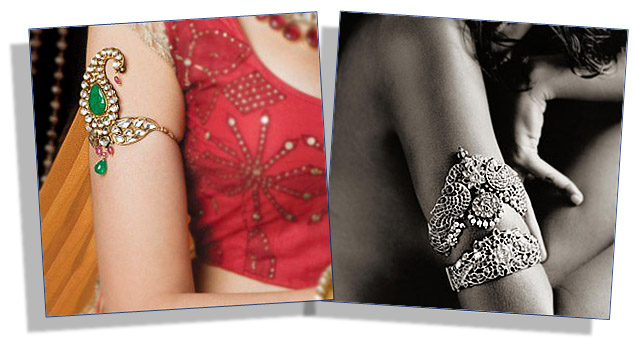 From heritage family archives of of Ganjam (right image)

Constant friction of bangles improves the blood circulation and gives the needed friction to the pulse points in our hands. The electric charge passing through outer skin is returned back to body because of bangles, which has no end to pass the energy outside but to send it back to the body. This way a women regains her strength which is presumably wasted otherwise. 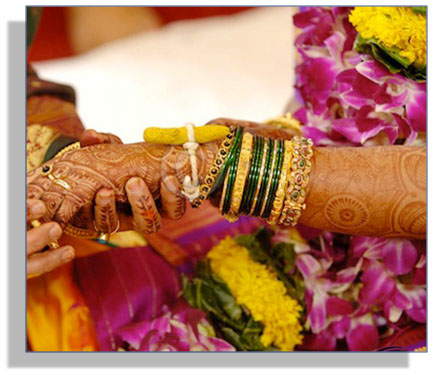 Hath-phool is a combination of ring and bangle. It has rings attached to the bangle with gold chains. Earlier, it was compulsory for five fingers, however these days trendy hath-phool for  single finger is also quite popular and can instantly glamorize your overall dressing. 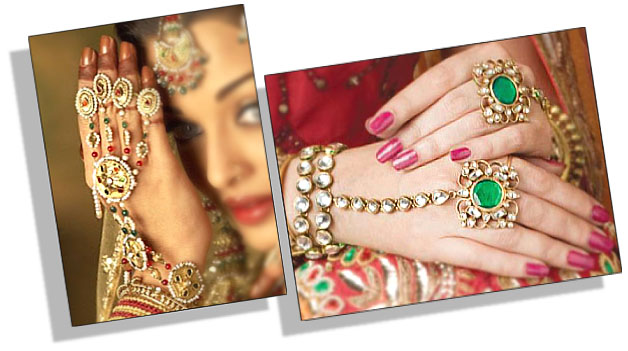 Ancient Indians classified the significance of fingers which are connected to different parts of our body and brain. Any metallic friction in the body kindles specific brain neurons. 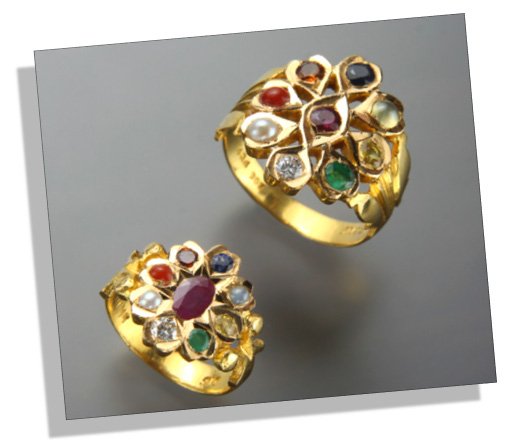 Thumbs in both hands are believed to be connected to brain nerves which connect to sexual organ. However, metallic friction on thumb has an adverse impact on sexual organ. So, it is advisable to avoid wearing any ornament in thumbs.

Index finger's nerves are connected to brain’s learning capacitor neurons, and in ill-situation it is advised to wear gold ring.

It is said that middle finger’s nerve passes through brain’s divider line, and if there is any metallic friction on middle finger, then it leads to confusions in life. Due to this, generally people don’t wear ring in middle finger.

It is commonly believed that nerve passing through ring finger is evenly spread across entire brain neuron cells and any frequent metallic friction caused in this finger is very good for one's health. It also improves one's general capacity in handling his/her life with ease and confidence.

In some cultures, it’s considered that ring finger of the left hand connects to heart. This traditional belief is all over the world, and it is customary to wear both engagement and wedding band on the left ring finger.

It is the most sensual of all ornaments. A hip belt attracts attention towards sensual naval area, highlighting the thin waist of a woman. It is made of silver, gold and even diamonds. 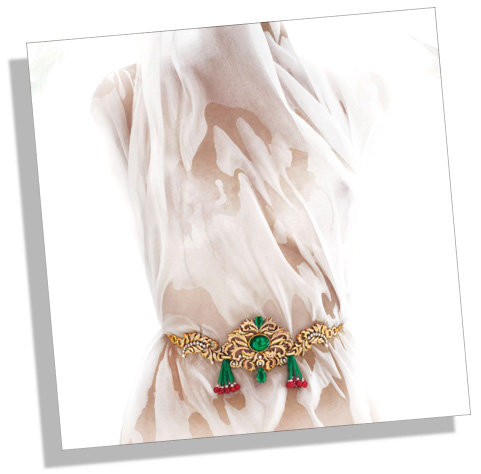 It was very particularly used by women to keep a check on fat accumulation on hips and pot belly. Such simple measures used by smart ladies then, and we ladies of today depend on mean weighing machines!

Anklet is popularly called Payal, and is worn just above the foot joint. Chada has three sets of bangles made by bending solid rod of silver and is worn by both men and women. 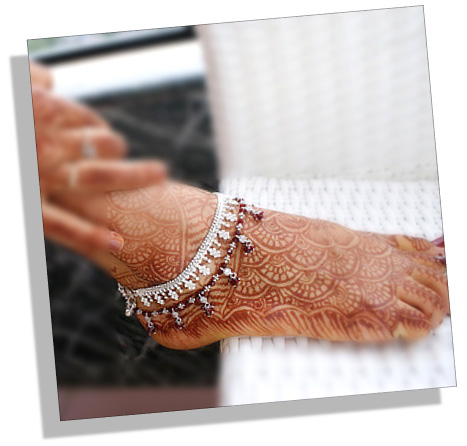 It is believed that by wearing anklet, energy is not wasted but returned back to body. On regular wearing, silver is absorbed through skin which has a pain-relief effect, increases blood circulation and reduces muscles pain.

In western culture generally anklets are worn in one leg, but in Indian culture Payal or Ghungru are worn in both legs.

It is generally made of silver and is compulsorily worn by Indian married women. Poli is usually worn in two toe fingers (second and/or third).

It’s believed that nerve in second toe finger connects to the uterus and passes through heart. Due to this, constant friction - caused while walking and doing all sorts of chores - revitalizes the reproductive organ.

Pola has set of three rings attached by a loop between fingers. By wearing it in both feet, menstrual cycle course is believed to be regularized with even intervals, thereby increasing the chance of conceiving. Silver being good conductor, absorbs the polar energy from earth and passes to body, thus refreshing whole body system. 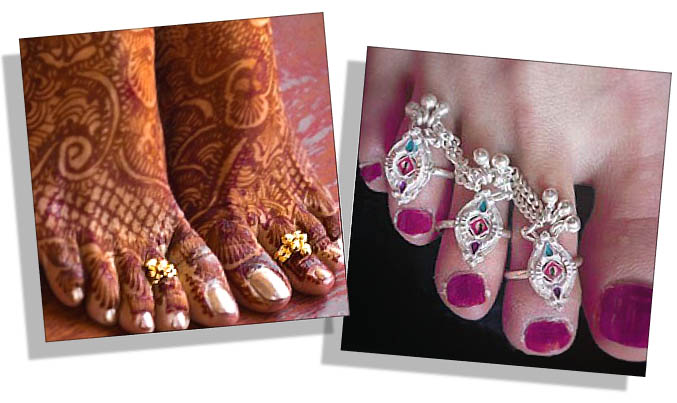 So, now we even have therapeutic benefits to justify our love for jewelry. I’m sure you must have made note of the jewelry piece that’s your favorite and going to be your next buy.