Diamond History - Before you start building your knowledge of diamond jewelry, why not get an idea of history of diamond first?

So, here on this page you will get a chance to explore the origin of diamond and its relationship with humans. In the process of unraveling the diamond history, you will get introduced to:

Diamond has derived its name from ancient Greek word adamo translated as ‘I tame’ or ‘I subdue’. A’da’mas an adjective which means unbreakable was used to describe its hardness. In Sanskrit it is called Vajra meaning ‘thunderbolt’. 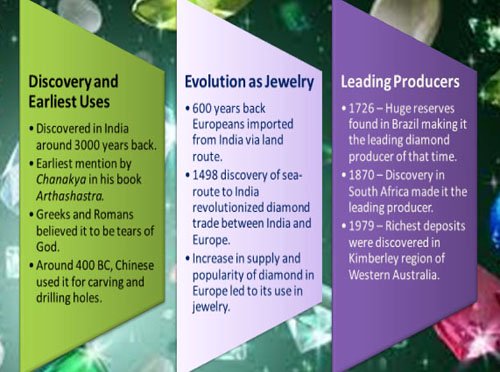 When talking about Diamond History, nothing will be more important than starting the subject with its discovery. Diamond was first discovered and mined in India around 3000 years back. Significant alluvial deposits of this natural stone were found along the rivers Krishna, Godavari and Penner. Famous diamonds like Koh-I-Noor and Blue Hope were discovered in India only.

The earliest mention of diamond was in Sanskrit manuscript 'The Arthashastra' (meaning the lesson of profit) written in 3rd century BC by Chanakya, the great philosopher and economist of ancient India. This book has described the qualities of diamond like hardness, luster and dispersion.

In ancient India it was considered to be so sacred that it was used to decorate the statues of deities. Greeks and Romans considered diamond as tears of the Gods and splinters from falling stars.

Plato the Greek philosopher has mentioned diamond as living beings, embodying celestial spirits. Around 400 BC, Chinese used this stone in tools for engraving and carving jade and drilling holes in beads and pearls.

Around 14th – 16th century, diamond was not only used in jewelry, but was also treated as Amulet. Amulet was believed to bestow fearlessness and invincibility upon the wearer.

It was a common belief that diamond could alter the course of astrological events by bringing good fortune to those who wore or carried it. Surprisingly, in those days men were more inclined towards diamond as it was supposed to enhance their sexual skills. Even today diamond is worn as a birthstone.

About 600 years back, Europeans imported diamond from India through land route. But this trade route had lot of restrictions imposed by Arabs who had the control on this route. Due to this, diamond supply to Europe was very limited. And it was one of the reasons behind low popularity of diamond among the masses in Europe.

But this bottle-neck was not going to last long after the discovery of sea route between Europe and India. In 1498, Vasco da Gama the Portuguese navigator reached India via Cape of Good Hope in South Africa, thus discovering the sea route to India. And you know what, this discovery proved to be a blessing as it resulted in hassle-free diamond trade between India and Europe.

Goa in India was set up as the Portuguese trading center and diamond trade route was developed between Goa and Antwerp via Lisbon. This increased the supply and popularity of diamond in Europe leading to its use in jewelry like wedding rings etc. 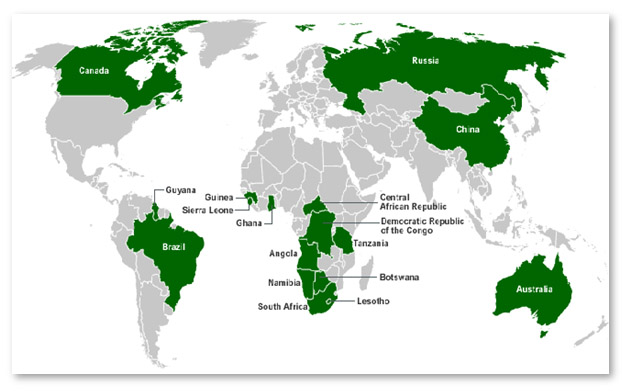 Till 18th century, India was the only source from where this stone was exported world over. Then in 1726, Brazil came into the picture where huge reserves of diamond were discovered. These discoveries made Brazil the leading diamond producer of that time.

However, that was before the industrial age when there were no heavy machinery available to dig deep into earth in a cost-effective manner. So, diamonds from India and Brazil were extracted from alluvial deposits only with river basins being the main source of this gem.

Later on, with the advent if industrial era and invention of more advance tools and machinery, prospectors shifted their focus on primary diamond deposits, i.e. kimberlite and lamproite bearing volcanic regions. This is when around 1870, huge reserves of diamond were discovered in South Africa putting it on the map of diamond producing countries. Reserves were so huge that South Africa became the leading producer of diamond which it maintained until 1920's when Zaire entered the production scene.

In 1979, richest diamond deposit in the world was discovered near Lake Argyle in Kimberley region of Western Australia. Argyle diamond mine was the world’s largest diamond mine and the top-producer of gem quality diamonds at one time. However, since the latter half of first decade of 21st century, production from this mine has fallen drastically with depletion of diamond deposits.

From mid-1980's, Botswana became one of the top-producers of diamonds, and with some of the highest yielding mines has now become the biggest producer of diamonds - replacing Australia from top-position in 1999.

In the late 1990's, large deposits were discovered in Canada making it the 3rd largest diamond producer in world. Anther major diamond reserves are in Siberia in Russia. In Russia, diamond production started in 1950's and by 1970 it became one of the top-three diamond producers in world. 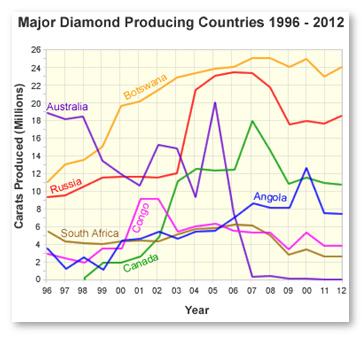 (Graph from Geology.com and Data from USGS Mineral Commodity Summaries)

You may also read about De Beers Diamond Cartel and how it controls world-wide diamond supplies.