These commitment rings in circular shape – with no beginning and end – are representation of eternity. It symbolizes couple’s eternal and unending love.

But, why not let’s dig a little bit of engagement ring history - after all it has long been the symbol of love and commitment - and know when and how the customs associated with engagement rings started and evolved over the years. 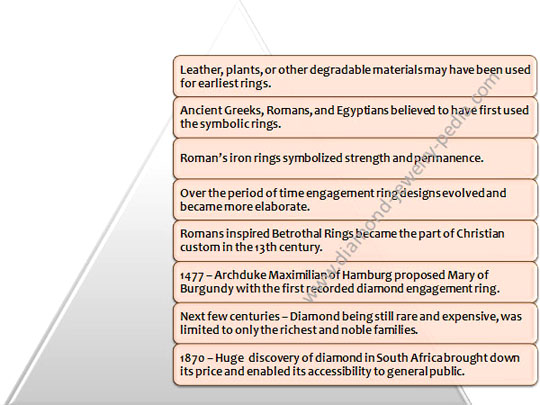 According to legends, engagement and wedding rings have the same origin. The ancient Greeks, Romans and Egyptians are believed to have first used the symbolic rings. Betrothal Rings custom inherited from the Romans, symbolized woman engaged to be married to a particular man. This became traditional Christian custom in the 13th century.

Roman’s iron rings symbolized strength and permanence. In some cultures, it was believed that fourth finger of the left hand - where the "vena amoris" or vein of love was supposed to - connect to the heart. This tradition continues till today, as it is customary to wear both engagement and wedding band on the left ring finger.

It is likely that the first rings may have been made from leather, plants, or other degradable material. Later, as the time passed, Romans are believed have made bands of iron, copper or may be of silver or gold.

In 1477, the Archduke Maximilian of Hamburg proposed Mary of Burgundy (shown in the image) with the first recorded diamond engagement ring. 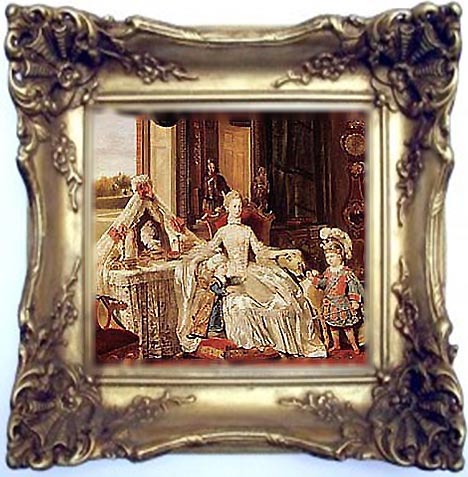 The ring was set with thin, flat pieces of diamonds in the shape of an "M". After this proposal, it became a trend in upper class to give the sparkling diamond engagement rings and gemstone engagement rings to their beloved and betrothed.

Over the next few centuries, diamond was still a rarity and very expensive, and giving a diamond engagement ring was limited to only the rich and noble families.

Around 1870, huge reserves of diamond were discovered in South Africa. This brought down the price of this expensive jewel drastically and opened the gate of accessibility to general public. Now, diamond began to be popularly used in jewelry.

Later, extensive marketing by De Beers (during middle of 20th century) led most of the people to believe that if it’s an engagement ring it has to be a diamond engagement ring.

In 1979, when richest diamond deposit in the world was discovered in Kimberley region of Western Australia, it further increased the availability and affordability of diamonds for the general public.

So, now you know engagements rings exchange has been going on since ancient times. Although, it was not as romantic, glamorous and extravagant as it is today, engagement rings have been the most symbolic and universal expression of true love and lifelong commitment.